Warlight Warlight, by Michael Ondaatje is a nonlinear, atmospheric novel set in post-World War II London. The city is thick with fog, electricity is spotty, and a sense of foreboding hangs over the story. Despite the war’s end and a desire for normalcy,  “… Partisans fighters refusing defeat” make their presence known.  The storyline follows […] 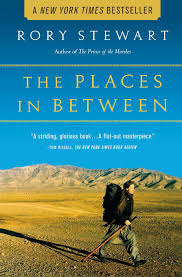 *****Book Review: The Places In Between by Rory Stewart

In 2004, Rory Stewart, author of The Places in Between, trekked  400 Km (250 miles) across Afghanistan between the cities of Chaghcharan and Kabul. HIs mission was to follow in the footsteps of Babur, the first emperor of Mughal, who did the same walk in 1507. Babur also chronicled his travels which Stewart shares, along […]

Usually, I either can’t, or won’t, complete books like Gabriel Tallent’s, debut novel, My Absolute Darling. It’s a gripping, exhausting, page-turner about a fourteen year-old nicknamed Turtle who lives in an isolated, but stunningly beautiful location along the Northern California seacoast. Turtle lives with her father Martin, a psychological, sexual, and sadistic abuser. Tallent’s luminous […]

Animals Strike Curious Poses, Elena Passarello’s collection of essays about animals, is…well, different. She mixes fact and fiction to create what might be dubbed entertainment science. The anthology begins with “Yuca,” who was a 39,000 year-old mammoth. Throughout the book, readers are continually reminded of the magical nature of animals and the pleasure and wonder […]

Hillbilly Elegy: A Memoir of a Family and Culture in Crisis, by JD Vance

Hillbilly Elegy J.D. Vance, is the author of the bestseller, Hillbilly Elegy: A Memoir of a Family and Culture in Crisis. Before the reader even opens the cover, the book’’s alliterative title grabs you. The timing of its release was prescient, as it coincided with Donald Trump’s campaign theme to “Make America Great Again.” To […]

A Woman in Berlin, by Anonymous, is a book about mass rape during Word War II, including the author’s own violations. The forward and introduction state that the thirty-four year-old author was a professional journalist, who remained objective, even instilling bits of humor into her story.  In 2001, after her death, the public learned that […]

Snowblind by Daniel Arnold is a collection of fictional short stories highlighting extreme weather conditions and how they relate to the obsessions and excesses commonly found among mountain climbers. We learn that some men and women will risk anything, from disfigurement of severe frostbite, to the life of a fellow climber, if that’s what it […]

Reading Lights Out by Ted Koppel, reminded me of Cormac McCarthy’s post-apocalyptic novel, The Road. McCarthy writes fiction, some would call it science fiction, but Lights Out is a 279 page, real life wakeup call filled with expert testimony, solid research, and examples of what would happen if the United States experienced a major cyberattack.  […]