Usually, I either can’t, or won’t, complete books like Gabriel Tallent’s, debut novel, My Absolute Darling. It’s a gripping, exhausting, page-turner about a fourteen year-old nicknamed Turtle who lives in an isolated, but stunningly beautiful location along the Northern California seacoast. Turtle lives with her father Martin, a psychological, sexual, and sadistic abuser.

Tallent’s luminous writing and detailed knowledge of the natural world prevents this story from completely falling down a rabbit hole of horror and violence; Turtle’s nature walks sustain her and also the reader. She’s a survivalist who differentiates between pungent smells of the field or forest and finds where the wild mustard and radishes grows. Turtle unlocks beauty in life by parting “curtains of blooming orange nasturtiums,” to see “a black expanse of cobbles, and each cobble holds an eye of moonlight, and each looks soft and wet like flesh, stretched out before her in a multitude.”

This fourteen year-old child keeps body and soul together by her own physical toughness. She’s a markswoman, can withstand ice and cold, and adjusts to her tumbledown home. Still, she hates her life and herself, and, because her father says she is, she believes she’s a worthless slut. From the outside looking in, It’s difficult to comprehend Martin’s and Turtle’s tainted relationship. In Martin’s twisted mind, when he’s not being cruel and violent, he professes to love and need his daughter more than life itself. The girl believes and understands this need in him, and puts his desires before her own, even though she doesn’t want to.

Then, as often happens with teenage girls, Turtle meets a boy, gets a taste of the outside world and, in a heart stopping conclusion, channels all of her strength into escaping her father’s control. 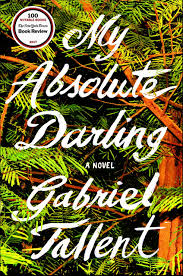