A Woman in Berlin, by Anonymous, is a book about mass rape during Word War II, including the author’s own violations. The forward and introduction state that the thirty-four year-old author was a professional journalist, who remained objective, even instilling bits of humor into her story. 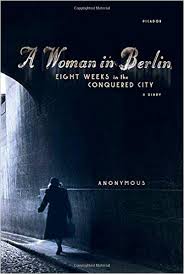 In 2001, after her death, the public learned that Anonymous was a woman named Marta Hillers. True, she writes without self-pity but, frankly if two women, instead of two men had written the forward and introduction, I think they would have better emphasized how the author’s anguish consistently leaps off the pages. It was an extraordinary book to read, but not an easy one.

One of Hillers most poignant passages comes after she has sex with a Russian soldier. Feeling dirty and powerless, she wishes there was more water and that it was easily obtainable, but above all, she longs for a decent bar of soap.

Prior to the Russian invasion of Berlin, a city filled with old men, women and children, the women fully comprehend what will happen when the Red Army arrives. Often using gallows humor, these proper middle class women not only understand and try to mentally prepare for the anticipated rapes, but they speak frankly and painfully discuss their feelings after the assaults.

The events in the book take place over approximately two months in the spring of 1943, but Woman in Berlin was first published in Germany in 1953. It outraged the German public, a populace who thought they would rule the world. The fact that they could not even protect their women was more than many could handle. Thus, the book was summarily dismissed as one that simply wanted to “besmirch the honour of German women.”

Everyday rules don’t apply in wartime and Hillers shows how sisterly bonds can help women survive unspeakable trauma. When you realize that seventy years after events in this book, today’s rape victims often can’t or won’t tell another soul what happened to them, the bravery and fortitude of Hillers and her cohorts is all the more extraordinary.

War, indeed, creates odd bedfellows. We learn that the women shared heartbreak, but neighbors, as best they could, also shared food, water and fuel. However, when war ends and “normalcy” returns, that sense of fellowship vanishes.