Let me start by stating that I’m a big fan of Stacey Abrams. I admire her intelligence, tenacity and success. I began reading While Justice Sleeps, believing it would reflect some of these strengths. And it did. 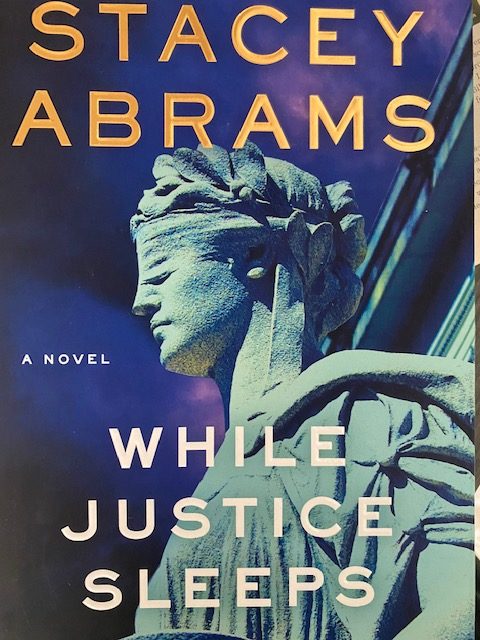 When the book opens, we meet Howard Wynn, a testy, but incorruptible Supreme Court Justice who mysteriously lapses into a coma. To everyone’s surprise and to the dismay of some, Wynn has appointed Avery Keene, his brilliant law clerk, as his legal guardian. He’s also given her his power of attorney. Avery’s smarts will cause her and others grave danger.

Avery is not only scholarly, she’s a chess phenom with an eidetic memory, who rolls up her sleeves and digs into the particulars of a controversial case the Justice was working on before his illness. Thus begins the intrigue and sleuthing that makes Avery perform more like superwoman than a twenty-something year-old lawyer, her brilliance not withstanding.

Avery juggles the sabotaging behavior of her drug addicted mother, while using her advanced chess strategy skills to decipher codes that Wynn has planted around the greater DC area. They lead her to the mystery of why a US biotechnology firm’s planned merger with a genetics developer in India has personal implications for the Justice. At the same time the nefarious US president, and cohorts, are doing all they can to stop Avery and others from uncovering details of the merger.

At this point, Abrams displays her own talents as she takes readers through a gauntlet of complex detail that could unleash biomedical terrorism on the public. Even with editorial input from medical professionals, Abrams’ handling of so much technical jargon is impressive. However, along with the twists, turns, and Avery’s superhuman sleuthing powers, I sometimes got lost. I also had to suspend my disbelief when this hard-nosed suspense novel defied reality.

As an author myself, I’m always interested in how other authors write or simply how their books sound. Though mostly a page turner and a fast read, I think While Justice Sleeps has too many descriptors and adjectives. For instance, towards the end of the book when Avery nervously comes face-to-face with the US President, Abrams describes there meeting as thus:

“As it was, a permanent case of nausea jitterbugged with nerve-searing apprehension. Which metastasized into unadulterated panic when President Stokes greeted her.”

There are a couple of issues with those two sentences, but personally, I love how “jitterbugged” is used as a verb. Yet to me, it loses some of its uniqueness when it gets bundled with words like—permanent, nerve-searing, and unadulterated. Still, this book is full of tension and imaginative possibilities that ring true to America’s current state of affairs.