It’s not readily apparent from my title, but one reason I wrote These Boys Are Killing Me Travels and Travails with Sons Who Take Risks was to praise my sons, Brennan and Colin, for successfully backpacking around the world. Brennan did it in 2001, then Colin left in 2003. Both were in their twenties. I know the book’s title better conveys the effects their travels had on me. They did not have cellphones and reliable WiFi was not readily available in many counties they passed through. Thus, they were often unable to send timely emails.

Yet, a few years ago when I found and re-read their emails—which I kept out of fear that I might never see my sons again—I didn’t dwell on the passages that originally upset me. This time I mostly marveled at their accomplishments. They were lucky enough to visit many sacred sites, like Mt Sinai. Some friendship they made endure today. Most amazing was how two young me with a devil-may-care attitude willingly set aside all that was familiar in their lives and dive (literally at several points) into the unknown. 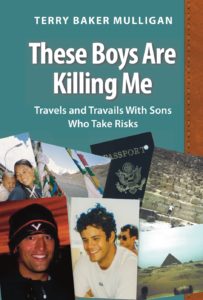 In retracing portions of these itineraries and sharing some of their journal entries, I hoped to give readers a look at how the world has changed in 20 years ago. At several points I also compare my sons’ experiences to when I traveled and hitchhiked through Europe in the 1960s. After September 11, war, politics, religious extremism, and other issues altered parts of Europe, Africa, and Asia that embraced my sons. Today it is more perilous (and not just in a mother’s overactive imagination) to retrace their footsteps and engage in some carefree activities Westerners enjoyed then.

Despite an author’s intent, a book sometimes strikes readers in ways other than what she or he intended. This seems to have happened with These Boys. True, readers tell me they enjoy reading about the kindness of Tibetan monks, the remoteness of some hikes my sons took, or the ancient beauty of cities like Aleppo, Syria before the bombs arrived. But, to my delight, some people are also struck by the loving bond and open communication between my boys and me. 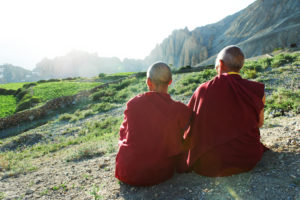 Our communiques varied. At several points, loneliness prompted them to reveal previously undisclosed vulnerabilities. With the distance of oceans, it’s easier to open one’s heart. It helps too, to remember that Mom’s love comes without conditions. But, sometimes one of them shared a boneheaded idea. For instance, feeling directionless, one son thought another year of drifting around Africa would help him decide what to do with the rest of his life. He got a blast of tough talk that came from  a place of love. There was aways the chance they might shut me out by closing communication (which was my lifeline to knowing they were still safe). I’m forever thankful that they never did.

To read about these adventures, you can find the book at Barnes & Noble and other bookstores. You can also purchase it on  Amazon: https://www.amazon.com/These-Boys-Are-Killing-Me/dp/0984692967