“White Circled Targets Drawn in Crayon,” by Daniel VanDeMortel: An Investigative and Suspenseful Article About Murder in the Old Polo Grounds Stadium in Sugar Hill Harlem,

Several years ago, Dan contacted me when he began research on the 1950 killing of Bernard Doyle, his article that would ultimately be titled: “White Circled Targets Drawn in Crayon the Untold Story Behind the Tragic Shooting of Bernard Doyle at the Polo Grounds.” It’s about the murder of an innocent spectator in the Polo Ground stands who was shot by a stray bullet. At the time, my SUGAR HILL book had recently been released and Dan knew I’d written extensively about the area.

As opposed to sensational and often biased media’s coverage of the murder and the Sugar Hill Harlem area, I was able to provide Dan with some perspective from residents who lived there at the time. I also threw in a few human interest tidbits, such as my best friend lived in the building where the shot was allegedly fired; Willie Mays (who joined the team in 1951) lived in the neighborhood and played ball with the local boys, etc.

Dan’s article, “White Circled Targets Drawn in Crayon the Untold Story Behind the Tragic Shooting of Bernard Doyle at the Polo Grounds” has just been published in the collection titled: THE POLO GROUNDS; ESSAYS AND MEMORIES OF NEW YORK CITY’S HISTORIC BALLPARK. Unfortunately the article contains too much data (including photos) to reprint here, but it is about so much more than baseball. It’s a tightly drawn story the covers the popularity of boxing during the mid 20th-century, the Irish in New York City, police tactics, the press, racism, juvenile incarceration, and the long odds to obtaining judicial fairness for young black men. It’s available for purchase on Amazon. 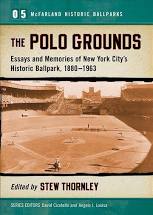 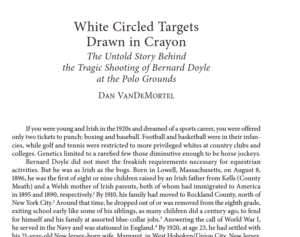