In March, 1919, 15 years after I slipped into Cuba from Mexico, my husband and I legally sailed there on a six night cruise that included two Cuban cities— Cienfuegos and Havana. Entering legally at the Cienfuegos port wasn’t that different except, this time, I got a stamp in my passport instead of on a separate piece of paper.

Cienfuegos coastline has crystal clear turquoise water and empty white sand beaches. After a quick tour of downtown, our bus headed to Trinidad, Cuba, our primary destination, about 90 kilometers east. The drive would take us through rural stretches which was what I mainly wanted to see. This visit lacked the quirky spontaneity of 2004. But organization and tour guides definitely have advantages. Our guide was straight up and honest about the highs and lows of Cuban life. More free enterprise is now allowed and small businesses are springing up, but ration cards have also returned (photo). The average Cuban worker’s monthly salary of approximately $30 US is woefully inadequate. Also, with the US, and now a Venezuelan embargo, food shortages are worsening. 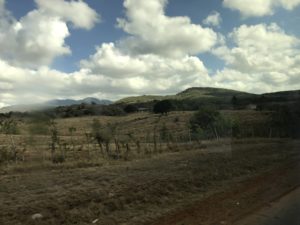 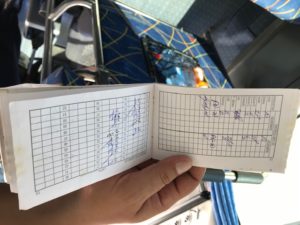 Eating beef or drinking milk is unlawful in Cuba unless you’re under 7 years-old, pregnant, or a nursing mother. Fines and jail time for breaking these laws are swift and severe. For 11/2 hours we drove past compact country cottages, dry scruffy yards, unplanted weed-covered acreage, and small farms with few crops growing. I spotted two cows, both on the scrawny side, and not one chicken or pig. To be fair, one other passenger said she saw some chickens.

After the 1959 Revolution, Fidel Castro began mixing foreign breeds with local stock to create a super cow. The imported animals didn’t adjust to the environment. Thousands of cows died; others were slaughtered as food became scarce.

Trinidad is justly proud of its beautiful colonial buildings. Many are downtown and sit around the Plaza Mayor, including the Museo Romantico, built in 1740. The restored buildings are jewels, but  the artifacts were limited. Instead, what stood out was one young artist whose studio we visited. His carved paintings were priced in the thousands US, and looked worth every penny. 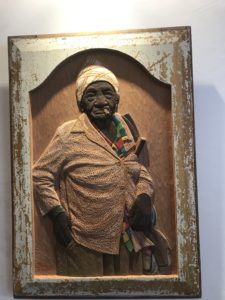 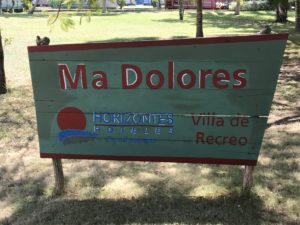 For lunch, we drove further west to a country resort called Ma Dolores. I saw small cabins nestled in the woods. Their open-sided pavilion restaurant provided a delicious lunch buffet with shredded pork and vegetables. I think our group of about 20 Americans, and a few Europeans all wondered how often the locals got to eat such a meal.