The Long Take by Robin Robertson is a beautifully composed but dark narrative poem about Walter, a traumatized World War II veteran. Walter, we’ll learn in emotionally savage flashbacks, has witnessed and participated in the most horrific aspects of war. Thus, he’s depressed, angry and mentally scarred from PTSD— a condition his generation called shell shock and/or battle fatigue. I am not generally a fan of poetry and in multiple ways, this was not an easy book to read. But it’s powerful, devastating and important that we hear Mr Robertson’s lament about one broken man who depicts our human despair. 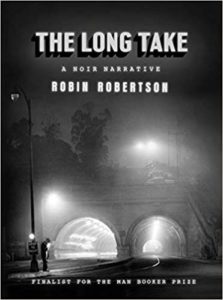 Instead of returning to his seaside town in a Nova Scotia, Walter heads for New York City, works on the docks and watches in wonderment as hulking new buildings soar skyward. The mid-century building boom that Walter witnesses foretells the creation of Big City, America. From the opening lines, I thought I was reading about latter day NYC; possibly in the 1970s when the Twin Towers were built, or the more recent post 9/11 building boom:

And there it was: the swell

But, author Robin Robertson is describing New York in 1946. A sense of displacement of land, architecture and people runs throughout the story. Not finding the peace he sought in New York City, Walter heads west to Los Angles. He loves watching old Hollywood movies and develops an affinity for the homeless, particularly War veterans, like himself. He befriends several of these men and eventually writes a gritty, well-received newspaper series about their plight.

Walter is a country boy who has an appreciation for the land. He is unsettled by LA’s rapid pace of urban renewal. Historic hills are lopped off and leveled in the name of progress. Farmland and housing for poor residents is paved over. When the demolition reaches his boardinghouse, Walter’s fragile stability again begins to slip. The undercurrent  of loss and foreboding that ripples throughout the book, now comes front and center and does not bode well for Walter’s future or America’s.