Edge of Eternity by Ken Follett

Edge of Eternity by Ken Follett

Ken Follett again tackles great chucks of history in Edge of Eternity, the final installment in his Century Trilogy, which covers 1961 through 1989, and includes such epic events as Vietnam, Kennedy’s assassination, the Civil Rights movement, the Cold War and the fall of Communism. Follett also takes on two pop culture issues: the genesis of rock’n roll and the ‘60s sexual revolution. 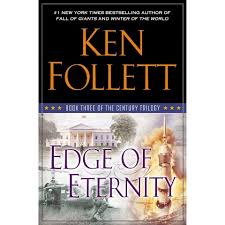 Much of the book is a refresher on world history that I lived through and mostly remember. But Follett always provides new material and insight, as when writing about the brutal crackdown on rock music and its fans by the communists regimes.

Follett tells his stories by placing readers into bedrooms, boardrooms, even at the Berlin Wall as it comes down. He’s masterly at juggling complex plot lines with a mix of real world leaders and fictional characters who are spread throughout Eastern and Western Europe and the United States.

Follett stumbles in a number of places, especially when writing about sex. There’s good reason to cover the sexual revolution in a 1200 page historical novel about the 1960s, but too often these scenes are clumsily written, hard to believe, but also demeaning to the characters.

Maybe to titillate or be edgy, Follett creates an affair between President John Kennedy and a young White House staffer. This storyline is likely based on Mimi Alfred’s 2013 revelation that she’d had an affair with President Kennedy while serving as a
White House intern. JFK was known to cheat on his wife, however, Follett further sensationalizes the story by turning the young woman into an African American character.

Remembering how cautious Kennedy was during the explosive civil rights uprisings, this throw-all-caution-to-the-wind narrative felt contrived, seemed far-fetched and would better be served in a romance novel.

I like happy endings and neat resolutions as much as anyone, but Edge of Eternity has too many feel-good mea culpas popping up at the end. In terms of realistic characterization and elegant prose, this effort doesn’t match his two previous books, Fall of Giants and Winter of the World.