George Hodgman, the author of Bettyville, a moving and often funny memoir, is a middle aged gay man who lives in New York City. For months at a time, he puts his life on hold and returns to Paris, Missouri to lovingly care for his still viable but frail, 90 year-old mother, who is losing her memory. George has his own issues to deal with: He’s a recovering addict, and has just been laid off from his editing position at a NY publishing company. His parents (father is now dead) unconditionally loved him, but George continually wrestles with their inability to acknowledge his homosexuality. He also struggles with his own sense of loneliness. 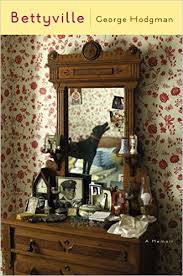 I found this book to be a quirky, but uplifting celebration of family. Hodgman’s mother, Betty, is not always easy to get along with, yet he displays extraordinary patience and grace while caring for her, something that many mothers of sons can only hope for.

George loves rural Missouri, but rues the changes caused by, he believes, “… the break up of the family farm; Wal-mart; meth.” He describes Missouri’s natural beauty; its “rolling fields … stretching miles and miles,…spring jonquils or bursts of peonies….” But he also recalls that growing up there was not always easy for a boy like him.

Missouri has many wonderful people, but it is not without reason that the state also has a reputation for gun toting, conservative, intolerance. On visits home, George seemingly does the impossible. He contentedly merges his gay, New York hipster, adult self with his rural Missouri roots, telling us at one point that he yearns to belong to “the tribe” from which he comes. One may wonder if that is as much a comment on over-the-top NYC life, as it is about the old gang in Paris, Missouri.