Covering, The Hidden Assault On Our Human Rights

“Covering, The Assault on Our Civil Rights” is a compact and meticulously researched book by Kenji Yoshino, a gay Japanese law professor. It is both a memoir about the demons Yoshino wrestled before coming out and a report, with legal overtones, on what life is like for all stripes of gay people in America. 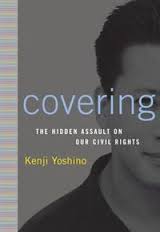 Yoshino introduces the term “Covering” and explains that being comfortable with who you are doesn’t magically occur just because you’re out. For many, the struggle continues because they feel pressured to cover. An example of covering can be seen with newlyweds. Straight newlyweds hold hands and are often openly affectionate. Gay couples want to do the same, but often don’t, because people still aren’t comfortable seeing two adults of the same sex engage in public displays of affection.

There are variations on this theme, even among gays. Some feel covering and acting straight is a sellout. Others see no need to be demonstrative. Yoshino further describes this by saying, “Normals” cover and “Queers” flaunt. Covering isn’t limited to the gay community. He writes about “Bully Broads;” women who are perceived as acting too much like men on their jobs. Mommy-types don’t fair well either if their boss or coworkers detect they’re too wrapped up in their kids.

At times Yoshino is repetitious and his legal language can wear on lay readers. There are also passages that practically sing with his lyrical writing, including an occasional poem. This book is important and different. Additionally, it reveals how other groups such as blacks and immigrants engage in covering behavior.