On the weekend of June 14-16, 2019, The St. Louis Writers Guild held their annual book event at the Renaissance St Louis Airport Hotel. The weekend consisted of author readings, workshops and genre talks on such topics as “Getting Started: How to Build a Story” and “Writing Historical Fiction.”  I participated in a Podcast panel called, “Success Stories From Inside the Author Maze” that will air Sunday, June 23, on “Write Pack Radio Live.” 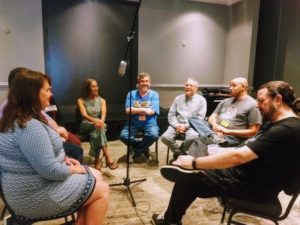 One of the most unusual talk-demos was  called “Writing the Sword Fight.” Brad R. Cook and David Lucas–a former and the current STL Writers Guild president–came with their impressive array of epees, light sabers, swords, pugil sticks, etc., and showed the audience various offensive and defensive moves. We learned what such moves are called and why some are lethal and others are merely glancing blows. It was a quite impressive and unique class. 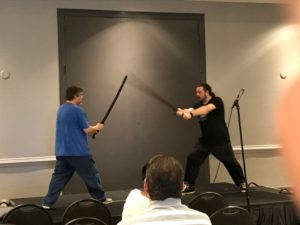